Odessa has always been welcoming city, attracting visitors from all over the world. There are many unique historical places we recommend you to visit: 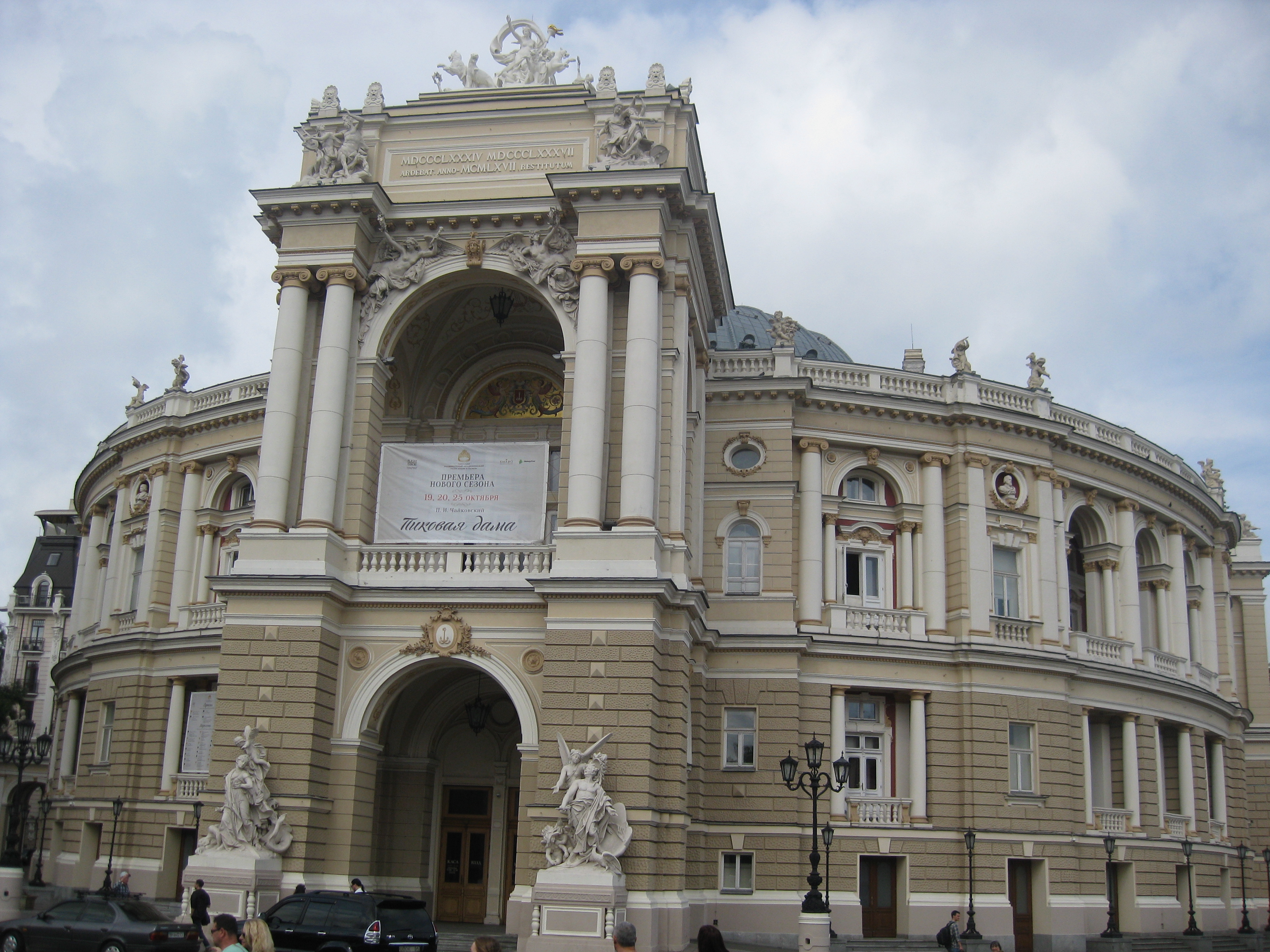 One of the most popular tourists attractions and city simbols of Odessa is Opera Theater, ranked by critics as one of the best in Europe. One of the oldest and most famous in Odessa, it was founded at the beginning of the 19th century by the Saint Peterburg architect Thomas de Thomon . 63 years later it was completely destroyed by fire.

In 1887 new Odessa Opera Theater in Austrian baroque style was built according to the project of Vienna architects Fellner and Helmer. The most recent renovation of the theater was completed in 2007. Theatrical experts higly estimated its unique acoustics, where words whispered on the 500 square meter stage were felt in any part of the hall.
Main entrance of the theater is decorated with sculptures from Greek mythology, symbolizing different genres of performing arts as Comedy and Tragedy.

Luxoriously decorated by various moulded ornaments, with the fine gilt interior amazes visitors before performance on the stage starts. The ceiling of the 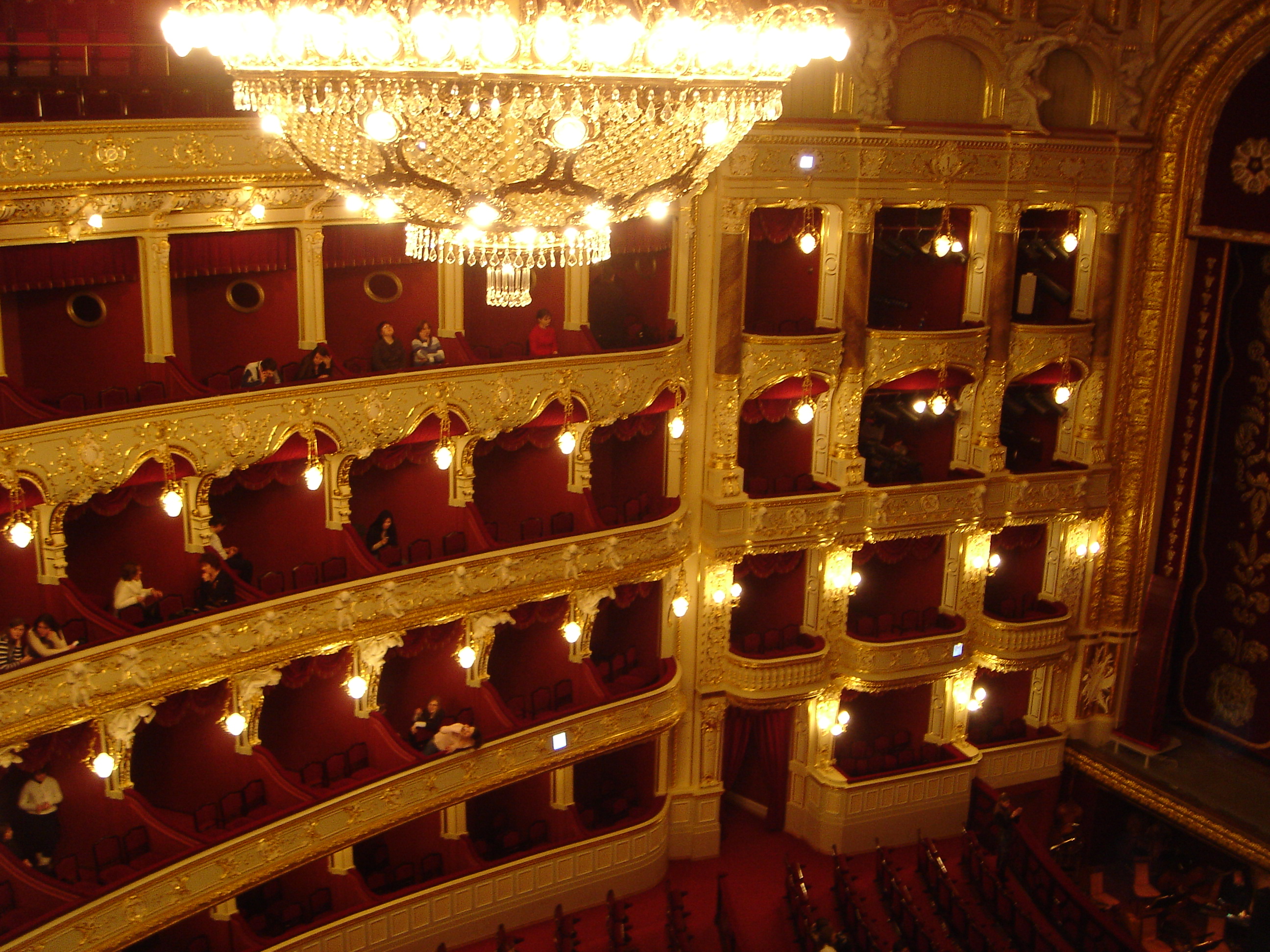 theater is adorned with four fascinating pictures, with a big magnificent chandelier in the centre. Viewing platform on the roof of this prodigious edifice gives you a chance to observe the whole city.

So tastefully made curtain of the theater, outlined by the famous theatrical painter Golovin are probably the best you can see in the world.

For those who are planning to visit Odessa, the Opera House would be the very first on the list of things we recommend to see. Its location is in Odessa downtown in its historic city center with many cobblestone strees and most of the sights. That is of course one of those places where you do now go wearing jeans and t-shirts, so get some nice, elegant clothes for the event, it is worth it. You would be delighted not just with a performance but, also with its amazing, unique interior and exterior, beautiful gardens and fountains. Many first time visitors are leaving it after the performance just breathless, without words to express their emotions. Enjoy! 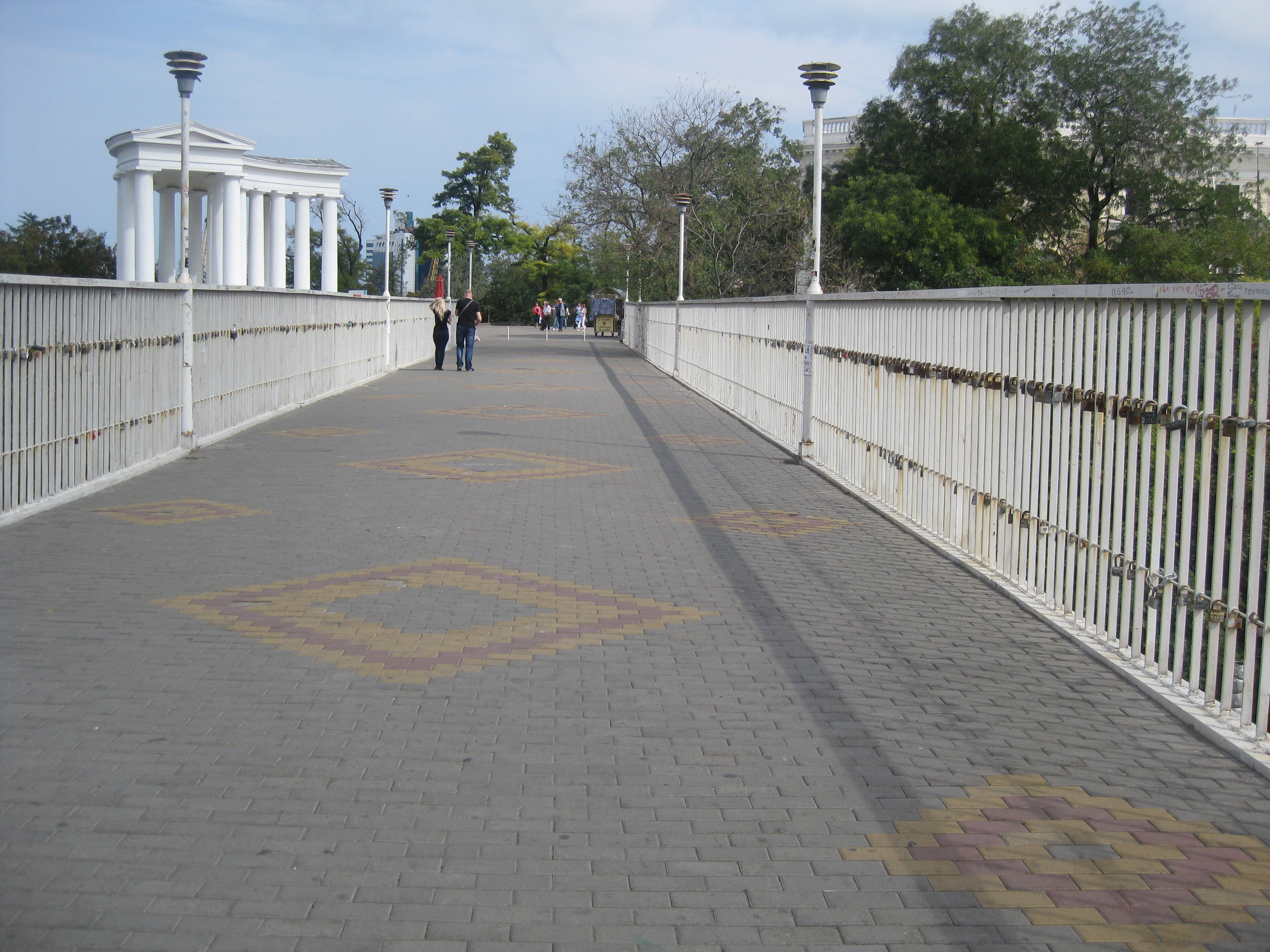 The local legend about Mother-in-law’s Bridge says about a government official whose wife's mother lived on the other side of the canyon. One of the stories goes that he loved the way she made pancakes, but there was no direct connection between their homes. So, the main motivation to build the bridge, was to make his visits easier. Another version for that pedestrian bridge to be called this way, because it is narrow and long, shaking a little when the wind blows, or even when a person jumps in the middle of it. Just like Mother-in-law’s tongue.

Relatively recently, lovers in Odessa have the tradition to fasten padlocks with inscribed names in it to the rails of the bridge, as a symbol of eternal love and their attachment to one another. After the lock is fastened the keys are thrown away in manifestation of the couple’s everlasting union. These, so called "Lovers' Locks are all different sizes; some of them gleam in the sun shine, while others are ferruginous with age. The tradition has been becoming more and more popular and making the bridge decorated with hundreds of “Love Locks”. 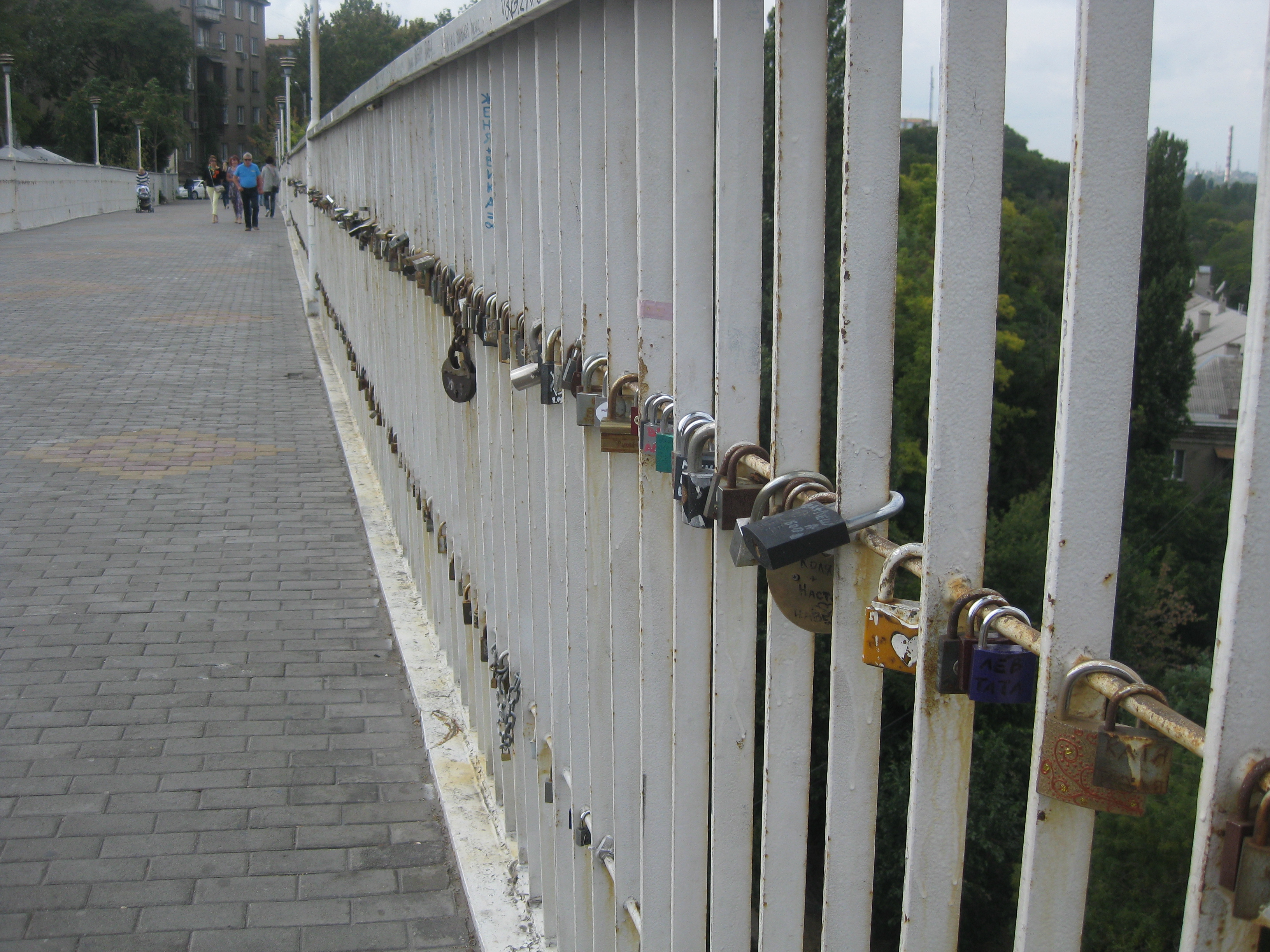 There were so many locks by 2009 that city officials had to remove most of them, explaining that their weight was too heavy for the construction and it could collapse. It did not make many good, as day-to-day newly married and lovers in Odessa keep hanging new badges of love on the bridge. Looks like there are many couples in love in Odessa… 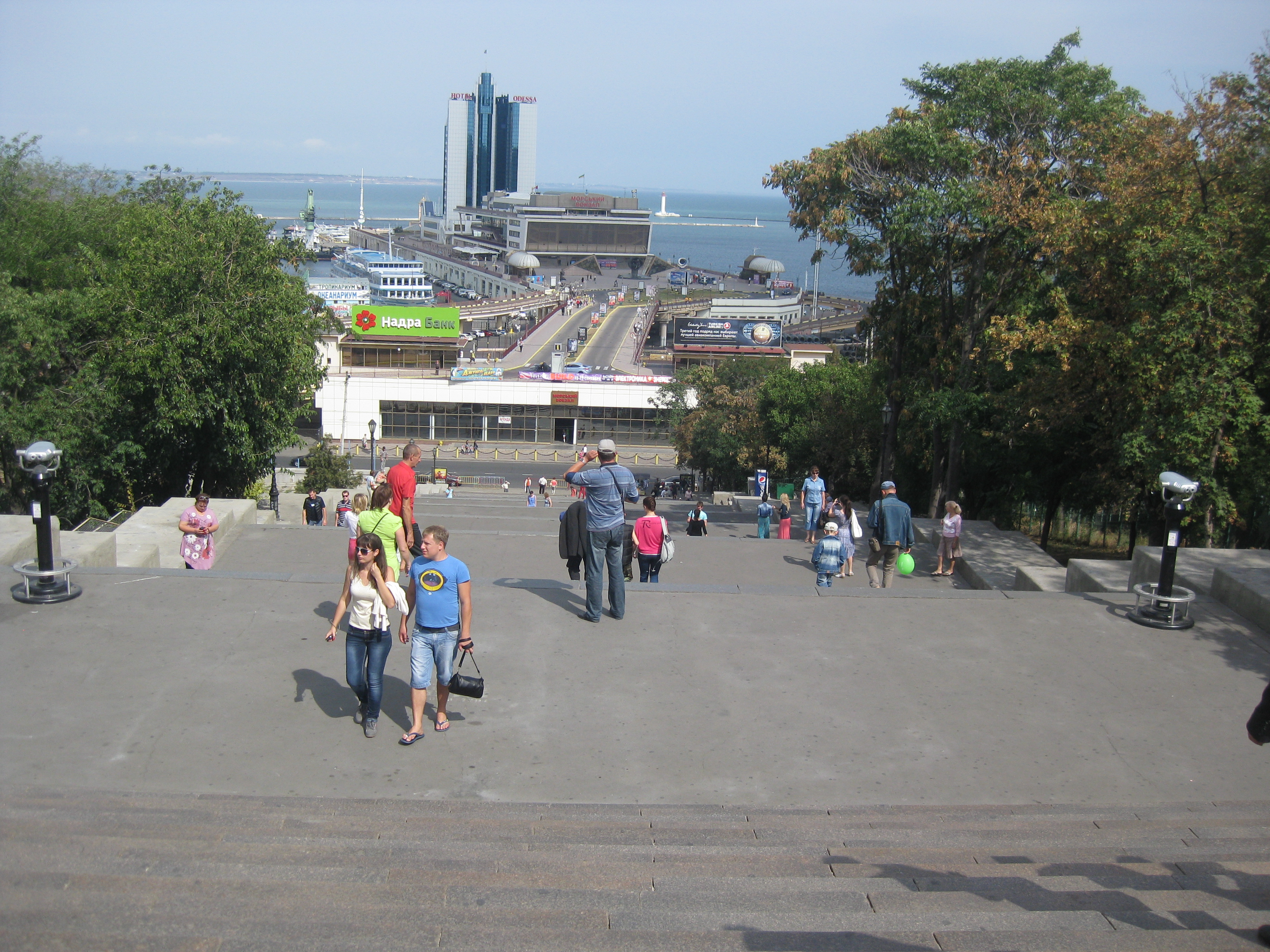 Potemkin Stairs is one of the symbols of Odessa which is also considered as formal entrance into the city from the Sea. From the beginning the steps were just access to the harbor in a way of simple wooden stairs, but with expansion of the Sea Port they were rebuilt and turned into one of the most beautiful in Europe.

Its design creates an optical illusion, when you look down, the stairs they do not seem that long, while looking up, they seem to be much longer. Looking down, you do not really see the steps, just spans, while looking up you see nothing but steps.

In 1925 a silent legendary film “The Battleship of Potemkin” was released, some scenes of the movie were filmed on the steps, where soldiers started to shoot at people. The movie was quite popular and shortly after Potemkin Stairs term was in use. Official name of it was changing from Primorsky Stairs to Potemkin Stairs many times, meanwhile Odessa people would always call it as Potemkin Stairs or Steps

In 1933 sandstones were replaced by granite while landings were covered with asphalt. Eight steps were lost under the sand when the port was being extended, reducing the number of stairs to 192, with ten landings.

In 1906, thethen modern funicular was built for transporting people up instead of climbing it. Having worked for 50 years it was replaced by escalator which served for another 20 years until 1990 when it got broken, and the money for its repair mysteriously disappeared. A new relatively modern funicular was installed in 2004. There is a beautiful panorama from the top of the steps at the harbor, which has also become one of the popular places for tourists. On the top of the stairs there is a well known monument to the governor of Odessa Duke de Richelieu.

Apartment details »
All one bedroom apartments